Hanoi has set itself a target to greet 35-39 million tourists by 2025, including 8-9 million foreigners, earning about 151 trillion VND (6.53 billion USD), under the city’s recently-launched tourism development strategy with a view to 2030. 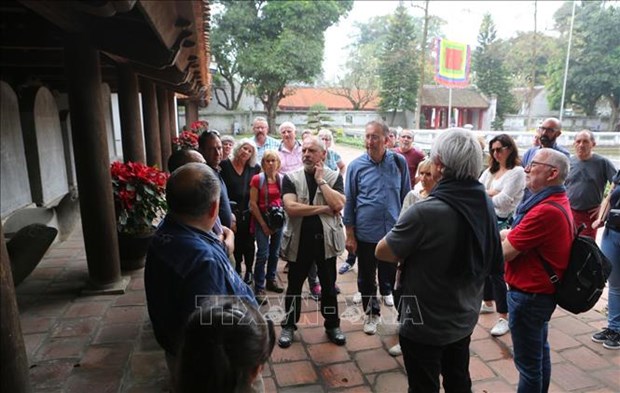 Foreign visitors at the Temple of Literature in Hanoi (Photo: VNA)

Hanoi (VNA) – Hanoi has set itself a target to greet 35-39 million tourists by 2025, including 8-9 million foreigners, earning about 151 trillion VND (6.53 billion USD), under the city’s recently-launched tourism development strategy with a view to 2030.

Hanoi will work to turn tourism into its spearhead economic sector which also serves as a driving force for others. It will apply cutting-edge technology and take skilled human resources a breakthrough factor for tourism development.

To realise the targets, local authorities will bolster tourism infrastructure investment and resources which will be carried out in a concerted and harmonious manner.

They are speeding up procedures of conservation projects at the Thang Long Imperial Citadel and Duong Lam ancient village, and others to restore and develop cultural values in tandem with tourism in Bat Trang pottery village and Van Phuc silk village.

The city has rolled out incentives aiming at investment in shopping malls and transit areas for tourists, among others. Hanoi is also encouraging environmentally-friendly tourism facilities and prioritising the improvement of the products at tourist attractions.

The capital attracted just 6.29 million visitors in the first eight months of this year, tumbling 67.3 percent year-on-year, with international arrivals down 75.6 percent to just 1.02 million. Such figures have resulted in a large number of local travel companies suspending operation while many hotels have shut their doors.

As the resurgence of COVID-19 in Vietnam has been basically brought under control, the tourism sector of Hanoi has been swiftly making plans to attract visitors again and gradually return to previous levels of growth.

Local travel companies are also moving to encourage customers to travel again, as all flight, train, and road routes to the central city of Da Nang, a major tourism centre and where the second COVID-19 outbreak started, have been resumed and many localities reopened places of interest.

There is only one week left before Hanoi begins to celebrate 1,010 years since it was established as Vietnam’s capital, called Thang Long at the time, with various activities such as a cultural week, a street festival, a craft village festival, a traditional boat race, a culinary festival, a calligraphy exhibition, and a dragon dance festival.

This represents an opportunity to promote local tourism after its long hiatus.

Many relic sites, places of interests, and entertainment venues have had their landscapes improved and new services opened to meet visitors’ demand.

Those activities focus on educating the youth on the tradition of national construction and defence and honouring the historical and revolution values.

A ceremony to mark the anniversary in association with the city’s Patriotic Emulation Congress in the 2020-2025 period will be held on October 10, with about 2,000 delegates expected to attend.

Representatives of international organisations in Hanoi as well as revolutionaries and Heroic Vietnamese Mothers will also be invited. During the event, the city will honour 10 most excellent citizens.

Incense offerings, exhibitions, cultural exchanges and sports activities will be held from October 1 to 15.

At the Temple of Literature - a must-see destination for every visitor to Hanoi, its centre for cultural and scientific activities is creating new mementos and introducing new methods of heritage education to inspire young visitors, while also developing night tourism by installing lighting to introduce the institution’s history.

Local entertainment venues are also revamping themselves to attract local visitors who are believed to be the best target in plans to recover the tourism sector at this point of time./.

Hanoi among world’s most popular destinations