Hanoi should become one of East Asian centres by 2045: PM

By 2045, when Vietnam becomes a developed country, Hanoi must have developed into one of the political, economic and cultural centres in East Asia, according to Prime Minister Nguyen Xuan Phuc. 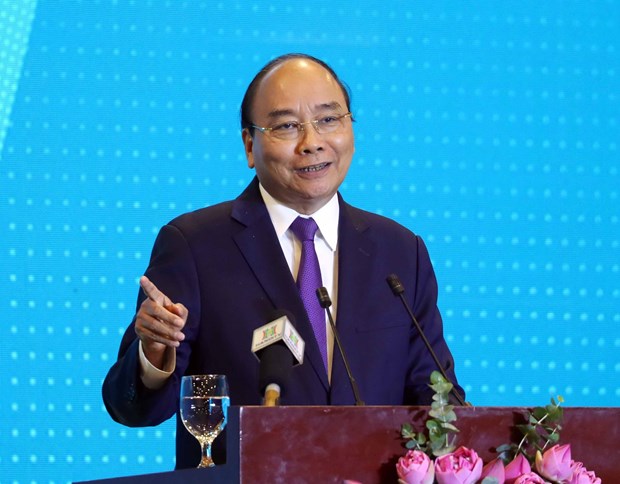 By 2045, when Vietnam becomes a developed country, Hanoi must have developed into one of the political, economic and cultural centres in East Asia, according to Prime Minister Nguyen Xuan Phuc.

He made the remark on June 27 while addressing the “Hanoi 2020 – Investment & Development Cooperation” conference that aimed to promote post-COVID-19 economic recovery and development in the capital city.

Opening the event, Secretary of the municipal Party Committee Vuong Dinh Hue said the conference looked to press on with administrative reforms and stronger improvement of the local business climate and competitiveness so that Hanoi can achieve as high as possible socio-economic results, with its gross regional domestic product growth 1.3 times faster than the whole country’s gross domestic product expansion, and the budget revenue target of 285 trillion VND (nearly 12.3 billion USD) this year.

In his speech, PM Phuc said Hanoi authorities have actively dialogued with and created optimal conditions for all economic sectors to develop, noting that thanks to their dynamism, the city has attracted a number of foreign-invested and large-scaled projects.

With its new stature, Hanoi now should not merely be the political, economic and cultural centre of Vietnam but one of the centres in Southeast Asia, and by 2045, among such hubs in East Asia, he said, adding that the target for Hanoi at present is no longer to compete with other Vietnamese localities but with other cities in the region like Bangkok, Jakarta, Shanghai, and Manila.

To do so, the PM noted, Hanoi needs to have good institutional quality and capitalise on existing special mechanisms for it, especially the National Assembly’s recent resolution on piloting some specific financial and budgetary mechanisms and policies for the capital.

The city should also make full use of opportunities and be more proactive to seek new development models and engage in global value chains. Besides, it needs to maximise the geo-political and economic advantages of Vietnam and the Capital Region, while cooperating with other localities and consider them partners for common development as each of them has specific advantages, according to PM Phuc.

He also asked the city to create a competitive and institutionally efficient and effective economy and become a liveable capital city.

Local per capita income has approximated 5,500 USD each year, and if the average annual growth rate of 9 percent is sustained, Hanoi will be able to become a high-income locality by 2030, 15 years ahead of the similar target for Vietnam, the PM added.

Hanoi should become one of East Asian centres by 2045: PM