A growing group of Hanoi lovers are taking to the streets and sketching images of the changing city for posterity. 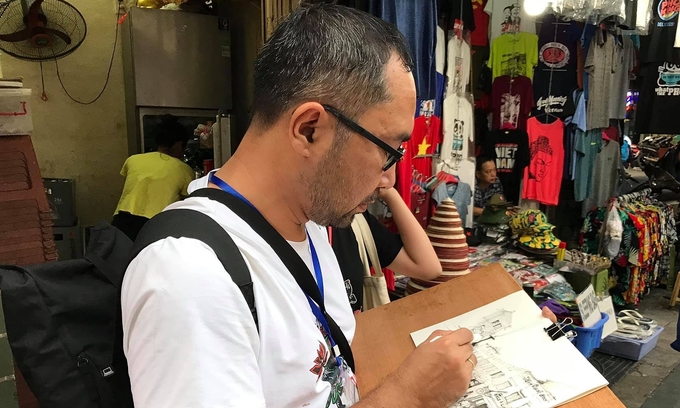 As Tran Thi Thanh Thuy and other fellow sketchers take to the streets to draw, first college students, then children sent by parents and now people of all ages and from all walks of life are joining them.

The group, called Urban Sketchers Hanoi, draw the capital with passion, day and night, especially at night when Hanoi looks even more beautiful to some eyes.

"We can draw until as late as 3 a.m.," Tran Thi Thanh Thuy, one of four architects who founded the group three years ago, says.

And as the sketchers sit down to work, sometimes locals come out to look at their pictures and feel surprised.

Once when Thuy and her husband Nguyen Hoang Lam, also a founding member, went out at night to draw, some street guards mistook them for thieves.

When Thuy told them she was sketching, they came over to take a look and exclaimed, "How beautiful! Can we borrow your sketches to check in on Facebook?"

For the past three years through its skillful sketches of Hanoi’s cultural heritage, Thuy’s group has been able to create love for the city, enthusiasm for art and a sense of friendship and community among people.

Xuan Hien, 62, who is a very active member of the group, says though she has been living in the old quarter for many years, she never saw any extraordinary beauty in it until she became a sketcher and looked at it with new eyes.

From four members initially, Urban Sketchers Hanoi has attracted about 4,600 followers on Facebook. Over 100 people actively take part in sketching activities. Active participants include everyone from school children who learn drawing to retired elders who are learning how to sketch for the first time.

Its latest book, a bilingual Vietnamese-English collection about the old quarter has just been published by Kim Dong Publishing House and will make an appearance at the 2019 Frankfurt Book Fair in Germany.

An earlier book features another important architectural and cultural heritage of Hanoi that is fast disappearing and may be gone soon: Hanoi’s old Soviet-style apartment buildings.

Thuy says her group wants to sketch those buildings quickly before they disappear. "There have been times when no sooner did we finish sketching an old apartment building than it was torn down, very fast."

For its efforts, Urban Sketchers Hanoi has been honored with this year’s Bui Xuan Phai Award. Bearing the name of the late painter Bui Xuan Phai, the annual prize honors people, works, ideas, and deeds that contribute to Hanoi’s culture and development.

Others in the same category to win the prize include the creation of the walking-only area around Hoan Kiem Lake every weekend and the public art on Phung Hung Street.

According to Quach Hoai, a mother of two boys who joined Urban Sketchers Hanoi at a very young age, what she loves about the group is that it nurtures love for art in children.

Her older son, Le Tat Khanh, 8, has done hundreds of sketches in the last three years. Last year, before the release of the book on Hanoi’s old apartments, Thuy’s group organized for Khanh his first "solo exhibition" right at the old apartment building where he lives.

"We meant to show Khanh how neighbors and friends recognized and loved his sketches to motivate him to try harder," Thuy recalls. The exhibition turned out to be a surprise in that people loved Khanh’s works so much that they even bought 10 out of the 50 sketches on display.

Prof. Nguyen Quoc Thong, vice chairman of the Vietnam Association of Architects, emphasizes the love that Urban Sketchers Hanoi is able to inspire and its contemporary relevance.

For instance, Thong told audiences at the book release, "Hanoi’s Old Quarter – Sketches and Memories" was not so much a guidebook filled with touristy information as a source of identification in which people familiar with Hanoi may find themselves in it and foreigners might be inspired to learn more.

"Hanoi isn’t beautiful in its details," Thong said. "Rather, it is beautiful as an inseparable whole. For example, Hanoi without people wouldn’t be beautiful. The houses in Hanoi aren’t big but lean on each other, creating a living space. And that living space is constantly changing to adapt to life."

The old quarter has never been a dead heritage or museum, but a living one which requires a subtle balance, he pointed out. "If we interfere with it too roughly, it can’t withstand the pressure."

The Hanoi Architecture University professor thinks it is this subtle balance between old and new that younger generations like Thuy and other sketchers could be searching for.

The sketchers are not just capturing the cultural heritage but also infusing in their works their own contemporary interpretations, he said.

"I bet that these architects will create beautiful works for today because they know how to love and feel their surrounding space."

The love for the vibrant old quarter that Urban Sketchers Hanoi is inspiring in many local residents also has an important political aspect to it. If a community really loves something, it will actively try to protect it and make the government and investors think twice before destroying old space to make way for new ones.

"The old quarter will have a better future for sure," Thong said.

Reaching out to the world

Besides a strong local community, Urban Sketchers Hanoi is also a member of Urban Sketchers Group, a global network of artists who sketch the places they live in or travel to. Seattle-based visual artist, illustrator and journalist Gabriel Campanario started the movement on Flickr in 2007, and later established it as a nonprofit.

The movement, whose motto is "We show the world, one drawing at a time!", has spread worldwide, inspiring many regional communities.

From Hanoi, Thuy’s group has travelled throughout Vietnam to sketch and also exhibited and taken part in the annual Asia-Link Sketchwalk in which artists from around the world gather in an Asian city for four days to sketch, attend workshops and share experiences.

This year’s Asia-Link Sketchwalk has been hosted by Urban Sketchers Hanoi.

Sketches from this event, which attracted 250 foreign sketchers from 18 countries and over 100 Vietnamese sketchers and volunteers, will be exhibited at the Hanoi Museum from now until the end of the year.

Hanoi and its bustling old quarter seem to be a great inspiration to the foreign sketchers. Tiu Lean Kai from Malaysia for instance tells VnExpress International that the city strikes him as an old one with a long history and many stories to tell.

He says Hanoi’s buildings with their rich styles and details always surprise him and the city’s uniqueness lies in its busy streets with a lot of motorcycles and narrow back lanes filled with hawkers.

"Sitting on the roadside for tea is an amazing ... experience for me."

Hanoi’s street culture is very different from that of Kuala Lumpur, whose downtown area is much smaller because it doesn’t have as long a history, he says.

Malaysians seldom sit on short stools on the roadside, but have higher tables and chairs placed further from the streets, he says.

"In Hanoi, everything is very close to the street."

For Arki Mark, a Philippine urban sketcher since 2013, Hanoi is not new. He has been working here for a year and a half and finds the city "a second home".

He joined Urban Sketchers Hanoi a while ago and has drawn many sketches of the city.

One sketch he drew during the recent Asia-Link Sketchwalk is of Dong Xuan Market, which he considers "a fine example of a built heritage".

Heritage of Hermes on display in Vietnam

Vietnam Grand Prix promoters set a target of 300,000 fans over the race weekend

East meets West in a cup of tea